The conventional image processing methods on hardness testing machines are fairly successful for clean images that present clear indentation boundaries. In practice, however, workpieces or samples often have rough surfaces that compromise the quality of the image processing which could potentially result in incorrect hardness values.

The INNOVATEST Brinell AI model is trained in our research facility/R&D department using powerful supercomputers. The training phase optimizes millions and millions of weight factors in a neural network, to learn how an indent can look like, using a gradient descent approach. Weight factors have been optimized by a human observer and after optimum weigh factors where determined. Using the AI function on our hardness tester to detect new indentations is called ‘’inference’’ and requires significantly less computing power. The AI model has been created.

During inference, a new image (a new Brinell indent image) is entered in to the neural network with weights that where determined during training. The complex algorithm is capable to calculate a “mask” on its own, this mask is plotted on top of the indent image, exactly filling the indent and marking the edges that then can be easily detected by automatic image recognition system.

This super advanced technology requires no special objectives and provides even indents with poor visibility, often the case with shallow indents in rough surface materials, to be perfectly detected and measured. 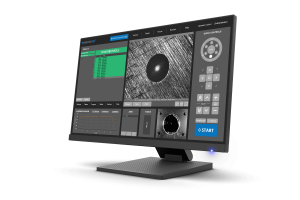